The 6.0 engine was offered from 2003 to 2007. The 2003 model year is somewhat different from later models, as it was the first year for this engine and, as the year models progressed, so did the changes and updates.

Engine removal can be handled in either of two different ways. Because of the body style change (along with changes in engine design), removal of this engine can be challenging. Some technicians prefer to raise the cab to gain access to the components, while others remove the engine to access the necessary fasteners and components in the traditional fashion. While there are pros and cons to each process, I prefer leaving the cab in place. The biggest reason is so the body is not scratched or damaged in any way. There have been many complaints about damage resulting from lifting the cab, so why take the chance?

This Tech Tip is From the Full Book, HOW TO REBUILD FORD POWER STROKE DIESEL ENGINES 1994-2007. For a comprehensive guide on this entire subject you can visit this link:

In order to remove the engine, you need basic hand tools along with a few specialty tools.

The best advice is to take your time and keep track of components as they are removed from the vehicle. The best strategy is to place the components in the order they are removed—in the bed of the truck or in a separate clean area. This helps when it is time for reinstallation.

Looking under the hood of the 6.0 can be very intimidating. But once several components are removed, the engine will be revealed.

This method also helps to shed some weight because just the long block weighs around 900 pounds. All of the accessories have to come off anyway, so when the engine is removed it can be placed on an engine stand (refer to Chapter 2 for more detailed information).

The engine bay of 6.0-equipped trucks is a little more cramped than in those trucks equipped with the 7.3-liter. I promise you that some components will be a challenge to remove, but it can be accomplished.

Before you get started, remove the battery cables and battery, and drain the antifreeze and oil.

Start by removing the air cleaner assembly. Once the filter is removed, remove the intake tube assembly going to the turbo inlet.

Remove the wiring harness from under the reservoir bracket and along the cowl of the windshield by removing the “push-in” retainers (left and middle). Fold the plastic shield toward the windshield and secure it to the wiper arms by a zip strap. This gives additional room to access more components.

Remove the intercooler piping from the turbo and both sides of the engine. The clamps can be removed with a 7/16-inch socket.

Next, remove the turbo. From the turbine housing, you need to remove the up pipe clamp (1) and the down pipe flange (2) that is a part of the exhaust system. On the 2004 to 2007 models, there is one bolt that supports the turbine housing (3) to the turbo pedestal that needs to be removed. For the 2003 model, the turbo pedestal design is different and this bolt comes in from the side instead of from the top as shown here.

On the driver’s side at the rear of the base of the turbo is a bolt that needs to be removed. Also remove the one on the passenger’s side.

Remove the four bolts that attach the turbo pedestal to the engine block and remove the pedestal.

Before removing the drive belt, the engine fan must be loosened from the water pump. In order to do this you need a special tool to break the fan nut free. The special tool comes with two wrenches. Take the wrench that looks like a hook and hold the slotted water pump pulley while using the other wrench to loosen the fan nut. Remove the upper radiator hose if you need more room.

Now the drive belt can be removed. This can be somewhat of a task when using conventional hand tools. This is what the belt tensioner looks like (left). In the end of the tensioner is a slot for a 1/2-inch ratchet. Insert a ratchet in the slot and place a piece of pipe over it for some additional leverage (middle). When pulling up on the ratchet in the tensioner, the drive belt begins to have some slack (bottom). At this time the belt can be removed from the alternator. 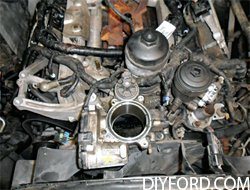 Remove the fuel supply and return lines from the secondary fuel filter basket.

If the vehicle is equipped with automatic transmission, remove the transmission cooling lines from the lower part of the radiator.

Remove two bolts at the base of the transmission cooler that hold the cooler to the front of the lower radiator support.

On each side of the radiator at the top of the upper radiator support are two rubber shields that are held in place with plastic pins. Remove the rubber shields.

In order to remove the intercooler and radiator the upper radiator support has to be removed first.

The fan removes from the water pump pulley in a counterclockwise rotation. Remove the fan and the inner shroud to expose the front of the engine.

At this time, remove the air conditioning compressor from the engine. This is not easy! The bolts come up through the bottom of the compressor to the engine block. Once the compressor is removed, lay the refrigerant lines to the side and out of the way.

Remove the lower radiator hose from the water pump.

Remove the battery cable support at the lower passengerside front of the engine block. In this picture, you can get an idea of how the air conditioning compressor is mounted to the engine. 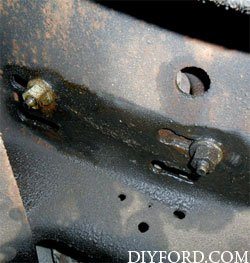 Remove the motor mount bolts inside the frame crossmember. There should be two on each side.

Disconnect the fuel lines from the engine using a special tool. The tool expands the spring inside the fitting that locks the fuel lines together. Fuel line disconnect tools can also be purchased at your local parts supplier. 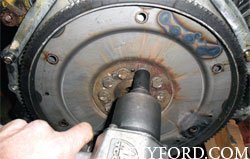 In order to place the engine on an engine stand, the rear structure of the engine needs to be removed in order to remove the crankshaft. Start by removing the flywheel. 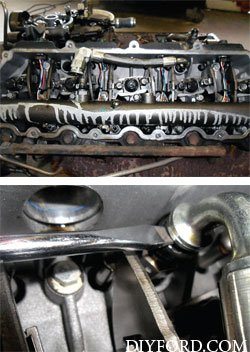 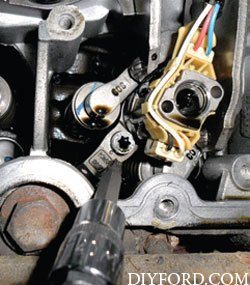 Using a number-40 Torx bit socket, remove the injector hold-down from the cylinder head so the injectors can be removed. 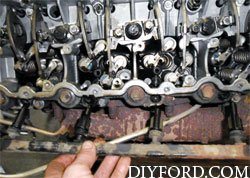 Remove the glow plug harness from the rocker box. 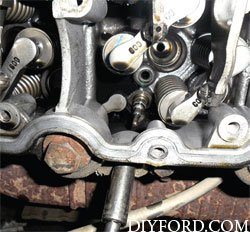 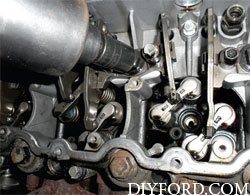 Remove the exhaust manifolds from the cylinder heads. 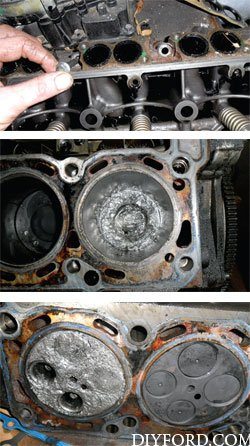 Remove the bolts that support the oil pan to the engine block. 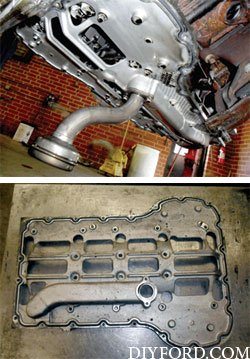 Remove the pistons and connecting rods. Make sure to stamp the connecting rod and the cap to the corresponding cylinder it belongs to. At this time also remove the lifters by removing the lifter holddown assembly. Each lifter hold-down supports four lifters. 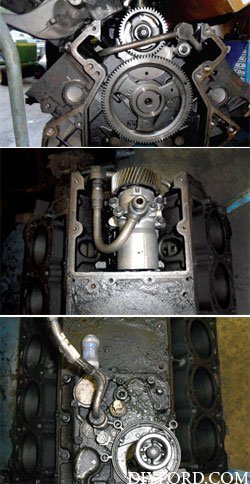 Written by Bob McDonald and Republished with Permission of CarTech Inc 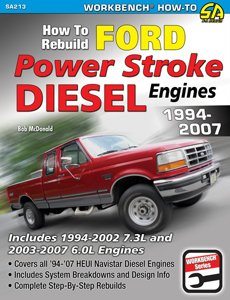