As a matter of fact, more often than not, there is no reason to re-use the stock third member for any performance-style vehicle when so many stronger nodular units are available in the aftermarket. Chances are that you will be replacing everything unless you are doing a stock rebuild.

This Tech Tip is From the Full Book, FORD DIFFERENTIALS: HOW TO REBUILD THE 8.8 AND 9 INCH. For a comprehensive guide on this entire subject you can visit this link: 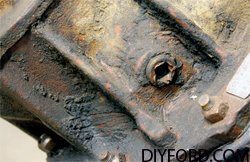 Before proceeding, remove the fill plug. This particular example is full of dirt and crud. Use a small flathead screwdriver or pick to clean it out, so that a 3/8-inch square drive fits properly. Here, the 3/8-inch drive was not tapped all the way in place. Most 3/8-inch extensions have a spring-loaded ball that helps hold the socket in place. Be sure that you tap in and fully seat the extension. If not, the plug starts to strip out as shown here. 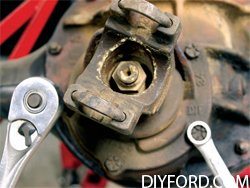 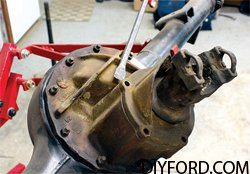 Use a hammer and punch to tap on the pinion in a few different spots to help free it. Keep in mind that the cartridge is held very tightly in the housing and needs to come out straight. Be careful to not tilt the unit. Also be careful not to pry on the cartridge too aggressively. Countless tabs have been cracked off, turning these cartridges into scrap. Another option is to attach a slide hammer to the pinion yoke to remove the cartridge. 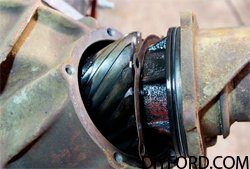 The O-ring is still in place on the pinion cartridge. The pinion depth shim is hanging near the pinion. Keep track of this shim if you are going to re-use the gear set. Even if you go with a new gear set, you should determine the thickness of this old shim for reference. The difference from nominal is marked on some gears on the pinion head, so the correct shim thickness can be easily determined. This marking isn’t always present, so you may need to do some research in service manuals or literature from new-gear providers. 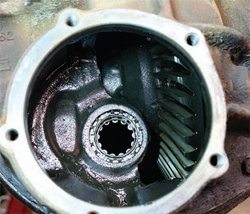 Once the pinion has been removed, you have your fi rst look at the ring gear and the internals of the gear case. Inspect the pinion straddle support and retainer. Clean the pinion trunnion of any gear oil and debris. The trunnion should be round and smooth without any signs of grooves or gouges. This unit still has the bearing and retainer in place and they look okay. Examine the pinion trunnion for any signs of wear. Besides having sludgy appearing oil, this  unit is in good condition. The oil appears to have been contaminated with water and is thicker (like pudding) and has a grayish color.

This is a worn pinion trunnion. This pinion needs to be scrapped. Since the hypoid gears are a matched set, both ring and pinion gears need to be replaced. You can use a speedi-sleeve to try to salvage a gear set. However, if the gear set has enough wear to damage this area of the pinion, it necessitates replacing the gear set. 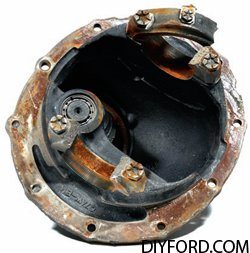 Severe overloading has cracked this pinion straddle-mounted bearing support. This unit also had enough deflection from excessive torque so that the gear teeth climbed over one another and pushed the differential case through the bearing caps. This is a testament to why you want to use a nodular third member for any high-performance applications. 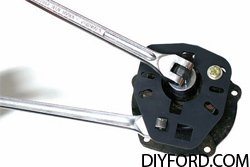 The flange-holder tool also acts as a flange puller. Typically the pinion flange spline has a slight helix built into it. This helix takes out any potential backlash in the spline and minimizes clunk. This helix also makes it difficult to remove and install the flange, so a puller is required to remove the flange. Use a two-jaw puller or even a harmonic balancer puller. Attach it to the flange and apply the appropriate force.

Remove the nut then use a paint pen to mark the flange and the pinion where they come in contact. This properly indexes these parts for re-assembly. Or you can make light dimples with a center punch, which will not be removed when you clean the parts in solvent. In some cases, the flanges are balanced as a complete axle assembly so you need to reassemble them in the correct alignment. Otherwise, the axle assembly is out of balance and can create excessive vibration in the vehicle. Obviously, if you are changing the ratio, you don’t need to worry about this.

The pinion head bearing is still pressed on the pinion shaft. You can see the stock collapsible spacer sitting on the splines. The bearing races or cones are still pressed into the cartridge. Knock out the pinion seal to get the tail bearing out with a hammer and punch from the back side. When these parts have been pressed apart, the basic arrangement of the parts looks like this. Some units have an oil slinger between the tail bearing and the seal. If you are replacing the bearings, use a hammer and punch to remove the races from the cartridge. Make sure that the cartridge is fully supported on the main round body portion of the casting and not the weaker mounting tabs,which can easily crack off.

Two different style bearing pullers are available on the market. Both work well. The clam-shell unit (above) is a special tool designed just for pinions. The fairly common bearing splitter style (top) is more versatile and economic. 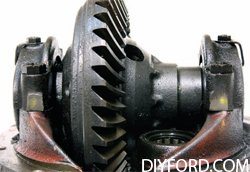 The bearing caps are machined in place with the gear case. You will need to return them to their original position and orientation (as with the 8.8-inch axle and engine main bearing caps). To help with this, I recommend stamping them with numbers. (I have highlighted my numbers in yellow in this photo to help them stand out.) Or you can use dimples; one for one side and two for the other side. Then remove them.

Differential bearings are preloaded; large adjuster nuts set the ring gear mounting distance. The adjuster nuts have a positive anti-rotation feature: keepers that are bolted to the bearing cap. Remove the bolt. 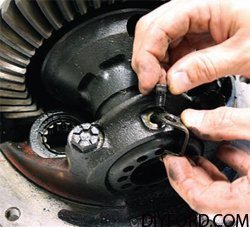 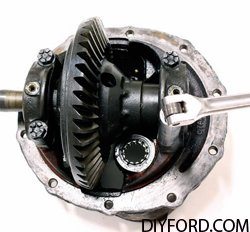 Use a standard socket and ratchet to loosen and remove the four bolts that secure the differential bearings in place. Notice that I stuck one of the axle shafts into the differential to help hold the third member from rotating. An impact gun also can be used to loosen these bolts.

Once the caps have been removed, loosen the adjuster nut. Usually, you can unthread it by hand. If the adjuster nut is stubbornly fastened and you don’t want to invest in special tools, use a couple screw drivers in two of the holes to loosen it. Closely inspect the inner surface of the adjuster nut where it meets the differential bearing cup. Often there is a slight wear groove in the adjuster. This can be erased with a few passes of a fine-tooth 1½-inch-wide fl at file. You want to make certain that the surface is as fl at as possible.

There are two available nuts for 9-inch axles. The 8-inch and small 9-inch nuts have the same outside diameter. The 2.891-inch nut is shown on the left while the 3.063-inch nut is shown on the right, which is standard for 31-spline axles and the 93⁄8-inch. The 3.250- inch (not shown) is the typical aftermarket version for large spline counts. Both sizes have the same thread pitch and number of notches. This means that indexing the nut a single notch of rotational motion equals .005 inch of axial movement. 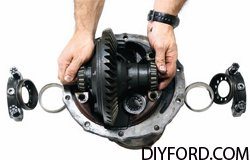 Here the bearing caps and bolts, along with the adjuster nuts and differential bearing cups, have been removed. Now just grab the differential case and lift it out of the gear case. 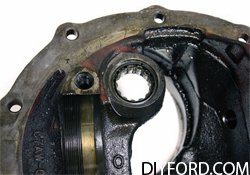 Close inspection of the internal components and the case usually uncovers any sign of concern, such as cracks. If the internal components are worn excessively and the case is questionable, it may make sense to Magnaflux the case or just replace it with a new nodular unit for any performance application. You can also remove and replace the pinion support pocket bearing. The bearing is held in place with a metal retainer. If you are careful and don’t deform the metal ring, you can re-use it. See page 97 for a picture of the sheet metal bearing retainer. 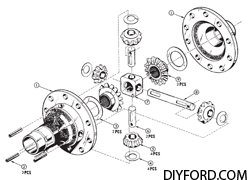 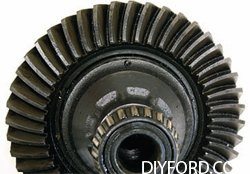 This open differential carries two pinions. The pinion shaft is held in place with a single roll pin, which can be seen here at the 12 o’clock position, just below the ring gear inside diameter. 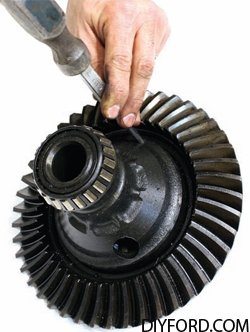 Use the appropriate-size punch to drive out the roll pin. You can use a long, 1/4-inch punch. You can remove the pin now or wait until the ring is removed. The order doesn’t matter. 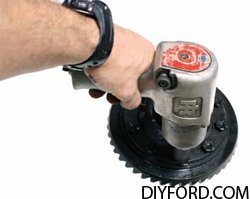 Remove the ring gear so you can remove the gear itself from the differential case. This is simply a matter of removing the ten bolts. These bolts are tight and require 80 ft-lbs or more of torque to remove. You can use an impact gun for this operation. 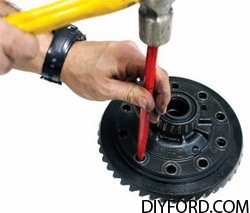 Place the differential on a block of wood or something soft to catch the gear. With a hammer, hit the punch to drive the ring gear through the bottom of the ring gear bolt holes. Make sure the punch is contacting the gear itself and not the threads on the side. Never hit the gear directly with a hammer. This will surely damage the gear and force replacement. 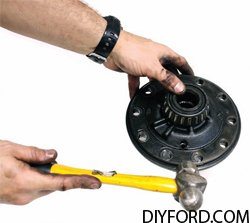 Once the case halves have been separated, you can see the internals. You can see the side gear on the left case half and the two pinions with the differential pin still in place on the right half. These pinions trap the other side’s gear in place. Be sure to look for signs of wear and scoring on both halves. 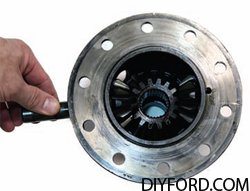 Remove the differential pin so the pinions come out. This pin was stuck in position and required some persuasion with a hammer and punch. The pin should slide out with hand pressure. The fact that this pin was so difficult to remove indicates worn ridges. 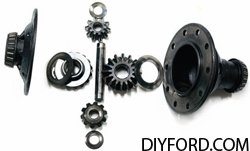 All of the components removed from the open differential are shown here. They are arranged to show both sides of the pinions and side gears. Also note that there are hardened washers behind each side gear and pinion gear. These protect the softer cast-iron differential case from the gears wearing into them excessively. 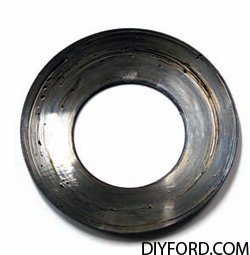 This is the inside surface of one of the pinion washers. It is where the gear runs. Wear and debris contamination led to the washer’s gouged wear surface. When this amount of wear is found, the washers should be replaced and I recommend replacing the entire differential. For a performance build, you want some type of limited-slip differential anyway.

This differential pin shows signs of wear, and the pinion bores are just as worn. Under close examination, this pin actually has a step and gouges in the area where the pinions run. This kind of wear is commonly found when a differential has been installed in a vehicle that has been exposed to excessive tire spin. This excessive tire spin causes a highspeed difference between the pinion gear and this shaft, which definitely needs replacing.

Written by Joe Palazzolo and Republished with Permission of CarTech Inc 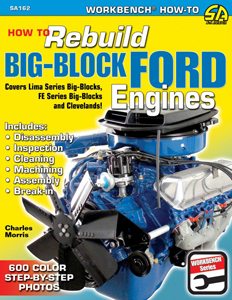