Ford had a fundamental challenge to its direction and future in the late 1950s—how to shed a stodgy image and dated technology. This effort began with a new generation of skirted-block FE-series V-8 engines in 1958. In 1960, Ford introduced its lightweight-iron Falcon and Comet sixes. The 90-degree Fairlane small-block V-8s followed in 1962. Prior to 1960, Ford cars and trucks were burdened with outdated, BorgWarner designed cast-iron MX and FX automatic transmissions known as Ford-O-Matics, Merc- O-Matics, and Cruise- O-Matics. The MX was a large-case automatic and the FX was small. Although these transmissions were rugged and dependable, they were heavy, complex, and not easily adapted to performance applications. This is when Ford engineers developed lightweight a l u m i n u m – c a s e automatic transmissions for an exciting lineup of automobiles that arrived in the 1960s.

This Tech Tip is From the Full Book, HOW TO REBUILD & MODIFY FORD C4 & C6 AUTOMATIC TRANSMISSIONS. For a comprehensive guide on this entire subject you can visit this link: 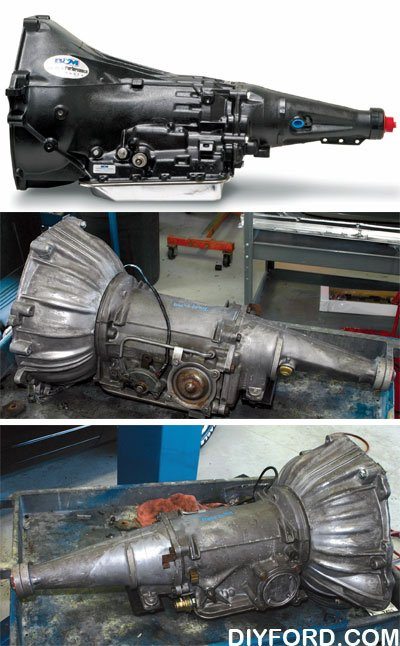 The 3-speed C4 Cruise-Omatic was introduced just in time for the 1964 model year. The 1964–1966 C4 was known as the Dual-Range Cruise-O-Matic due to its dual-range shift pattern, which included two driving ranges based on shifter position. For 1967, the C4 went to a more conventional P-R-ND- 2-1 pattern and a different valve body. This C4 Dual- Range is an early V-8 unit with a five-bolt bellhousing. The B intermediate servo cover indicates mismatched parts because the B servo is for sixcylinder engines. Expect to see all kinds of mismatched transmissions.

When Ford Falcon and Mercury Comet were introduced for 1960, they were available with a new lightweight Ford-O-Matic 2-speed transmission. It was designed and manufactured by BorgWarner for new-generation gray-wall-iron straight-6 and small V-8s. What made the little Ford-O-Matic different than its predecessors was its aluminum case and steel hard parts inside and out. In early applications, the Ford-O-Matic transferred heat to the atmosphere via the torque converter and cooling vents in the bell-housing, instead of using fluid as coolant and a transmission cooler in the radiator. Later versions had a transmission fluid cooler in the radiator.

The Ford-O-Matic and Merc-O-Matic were available behind the 144-, 170-, and 200-ci straight-6 engines, along with the 221- and 260-ci V-8s, which came later in 1962. The Ford-O Matic/Merc-O-Matic had a case-fill dipstick tube. Bell-housing and main case were cast as one to reduce weight and reduce the likelihood of leakage. At first glance, the 2-speed automatic looks like a cast aluminum FX or MX case.

Ford took what it learned from the 2-speed BorgWarner automatic and applied it to the C4 3-speed Cruise-O-Matic that arrived for the 1964 model year. The C4 was produced at Ford’s Sharonville, Ohio, transmission plant for its entire production life through 1981 and was the first automatic transmission Ford designed and built. The C4 employed a new state-of-the-art Simpson compound planetary gear set, which became an industry standard in the years to follow. The C4 got its name from the model year that it entered production: “C” for the 1960s decade and “4” for for the year, 1964. This naming practice didn’t last long—witness transmissions to follow like the C3 in the 1970s and C5 in the 1980s. 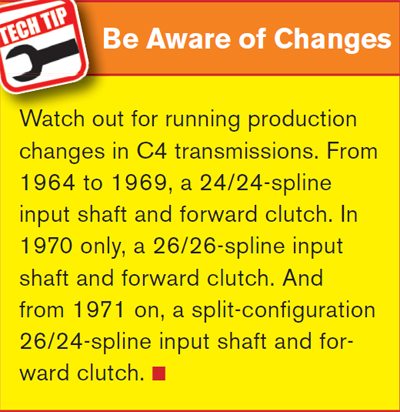 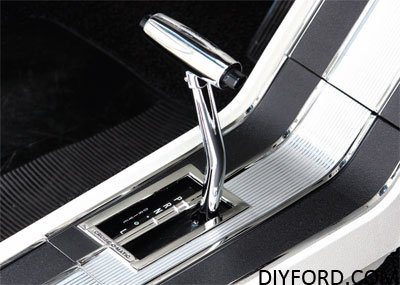 This is the C4 Dual-Range shift pattern for 1964–1966, with a large green dot for normal drive (1-2-3 upshifts) and a smaller dot for second gear only (driving on snow and ice). Too many motorists got this wrong and drove on the small dot, doing extensive transmission damage. For the 1966 model-year only, the C6 had this same shift pattern. 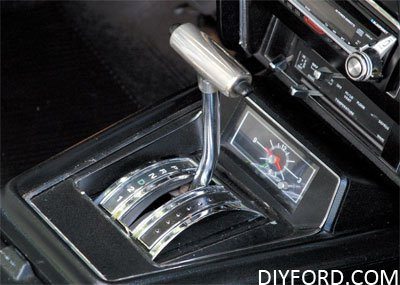 Beginning in 1967, Ford dropped the Dual-Range shift pattern for this traditional P-R-N-D-2-1 pattern and used a new name—Select-Shift. The shifter is placed at “2” for special driving conditions such as snow and ice, otherwise “D” for normal 1-2-3 upshifts. Both the C4 and C6 went to this shift pattern and name in 1967.

From 1964 to 1966 the C4 was called the Dual-Range Cruise-OMatic— known among enthusiasts as the Green Dot transmission. The C4 Dual-Range is equipped with a valve body that allows a driver to start out in second gear on snow and ice with a 2-3 upshift, which is the small dot (off detent next to neutral) on the indicator. The larger green dot at the detent next to “L” enables you to start out in first gear and go through a normal 1-2-3 upshift program.

For one model year only—1964— the C4 had a five-bolt bell-housing for V-8s only. In August 1964, the C4 and the V-8s it was mated to were fitted with a larger six-bolt bell-housing to reduce noise, vibration, and harshness.

For 1967, Ford did away with the Green Dot Dual-Range C4. Instead, it used a redesigned valve body offering a P-R-N-D-2-1 shift pattern known as Select-Shift. This valve body was used from 1967 to 1969. A redesigned C4 valve body and transmission case came along in 1970, which was used for the C4’s production life through 1981. In Drive, the C4 shifts the same as the Dual-Range at the large green dot with a normal 1-2-3 upshift program and the same gear ratios throughout. If you want to start out in low gear on snow and ice or to creep along in slow traffic, all you have to do is place the shifter in “2” (second gear) for controlled starts and no upshift.

The 148-tooth bell and flex-plate were designed specifically for Mustang II and Pinto/Bobcat/Capri with small transmission tunnels and are very hard to locate these days. There was also a version of the C4 produced with the 385-series (429/460) big-block bell-housing bolt pattern factory installed behind the 351M and 400M raised-deck Cleveland small-blocks in the 1970s. The 351/400M C4 is extremely rare because so few were produced.

C4 valve body variations are important to note because they’re significant to your transmission building project. At this time, I’m aware of at least four different types of C4 valve bodies and I suspect there are more out there. For 1964–1966, there’s the Dual-Range/ Green Dot valve body. At a glance, the Dual-Range valve body looks identical to 1967–1969. Internally, it has different valving and shift programming. 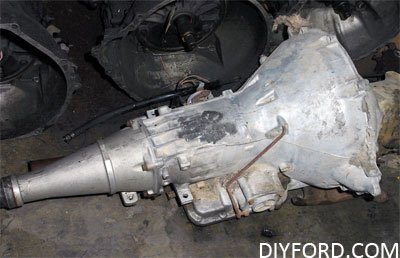 The round bell, six-bolt C6 transmission for FE-series big-block V-8s. A C6 is easily identified by its one-piece bellhousing and main case design.

In 1982 Ford introduced the C5 Select-Shift transmission, which was nothing more than a C4 with a locking torque converter to improve fuel economy. The C5 was in production between 1982 and 1986 at the Livonia, Michigan, transmission and axle plant and is not recommended as a performance transmission as received from the factory. However, C5 cases and many internal components are similar or identical to the C4, and are quite suitable for performance applications thanks to their improvements, as discussed in Chapter 4.

Like the C4, C5s were produced as both case-fill and pan-fill with either 157- or 164-tooth flexplates. None were 148-tooth flexplate. What makes the C5’s main case desirable is improved oil circuits and some improvements to case strength. 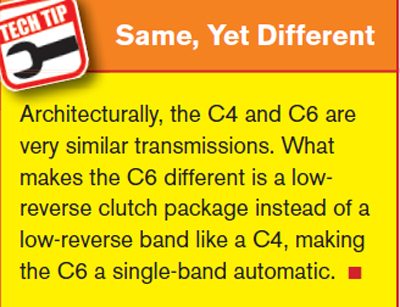 Prior to 1966, Ford FE and MEL big-blocks were fitted with cast-iron MX and FX 3-speed automatic transmissions. For 1966, Ford introduced its own heavy-duty C6 3-speed automatic transmission for high torque applications behind large displacement big-block V-8s. Although the C6 has a completely different case and internal components than the C4, it is virtually the same internally to the C4—on a larger scale for heavy-duty use. 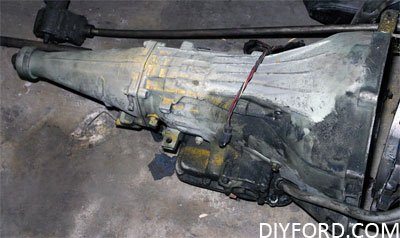 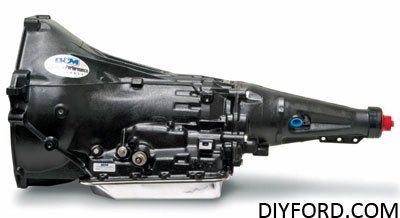 This B&M small-block C6 looks a lot like the big-block C6 unit except it’s a small-block six-bolt bell-housing design. This case is also ribbed for strength.

Finally, there was a C6 for Diesel engines beginning in the 1980s, before the E4OD (4R100) was introduced in 1989, punctuating this transmission’s reputation for durability. Despite the E4OD’s presence, Ford continued to build the C6 until 1996 for industrial applications.

By the 1970s, Ford had a respectable lineup of modern lightweight automatic transmissions. An ironic footnote to this story is the weighty cast-iron FMX transmission, which remained in production until 1981 behind 351W small-block engines. It was an easy off-the-shelf solution for Ford, which needed the FMX to keep up with production demands when there weren’t enough C4 and C6 transmissions to go around.

How to Read Ford Part and Casting Numbers

The prefix tells you when the part was originally released for production, what car line it was released for, and what engineering group it came from. 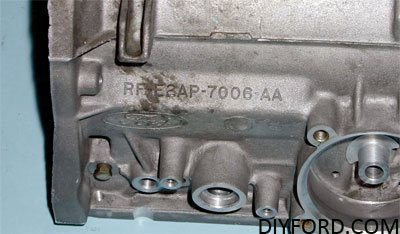 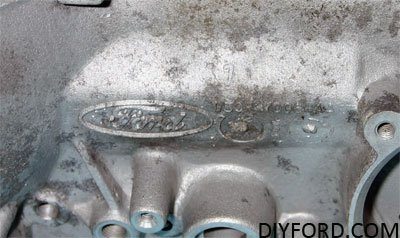 Casting numbers aren’t always easy to read. This 1975 C4 case (D5OP- 7006-AA) shows its vintage with a simple Ford casting number. Most cases have the Ford oval while others have “FoMoCo.”

Basic Part Number The basic part or casting number is the same whether it is an engineering number or a service number. For example, “7006” is the basic number for all automatic transmission main cases. What you’re concerned with mostly here is the prefix, which tells you year and basic application.

The suffix indicates the change level. “A” means original status of released part. “B” indicates at least one engineering change. The entire alphabet is used except the letters “I” and “L,” which could be mistaken for the numeral 1. When Ford goes through the entire alphabet, it starts over again at AA, AB, AC, AD, and so on.

It is important to understand that part, casting, engineering, and service numbers rarely match each other. The casting number is derived from the actual casting or part, and typically does not match the part, engineering, or service numbers. Unless the casting has been revised, the basic casting number does not change. It means the number you see in the casting does not match the part number in the Ford Master Parts Catalog. And if the catalog you are using is dated, as most are, expect even more changes in your Ford dealer’s microfiche or computer when it comes to suffixes. When demand for a part falls below a predetermined level, Ford discontinues or N/Rs the part. N/R means “Not Replaced.” 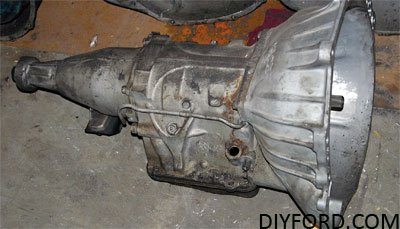 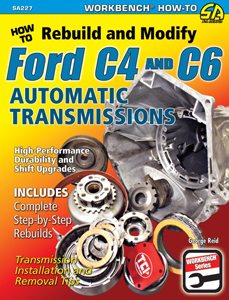